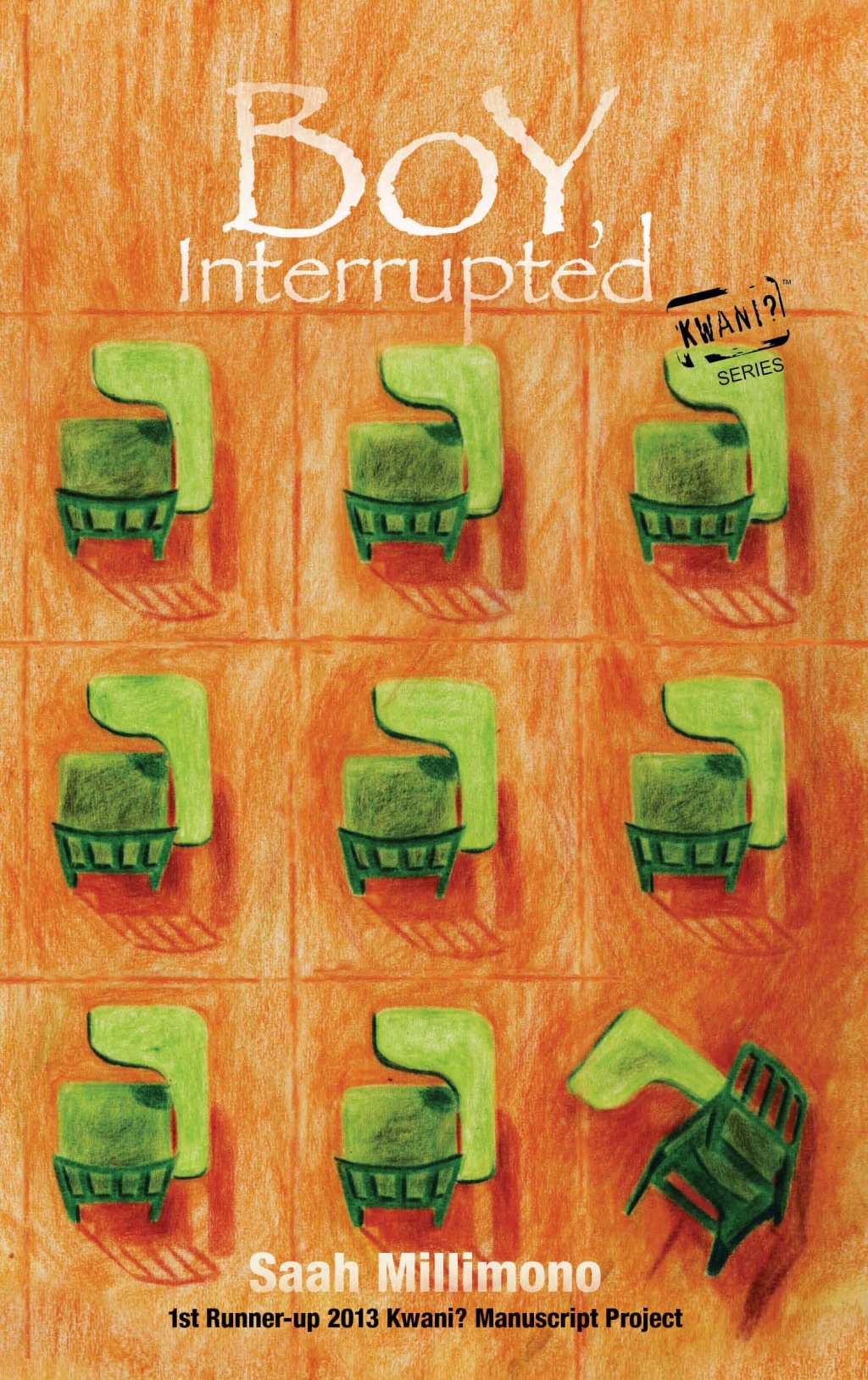 Today, I want to tell you a story. It is not my story. It is Saah Millimono’s story. Maybe it is actually not his story, it is the novel’s protagonist Tarnue’s story. And not just Tarnue’s, it is also Kou’s story. I know that if I go on, and on, this will end up as a story of Tarnue’s family, Kou’s family and by the time we are done, it will be the story of lives in Monrovia, Liberia and beyond to other countries that have been through civil war. As some commentators would want us to believe, this means not just neighbouring Sierra Leone, but much of Africa. Is this is a book about Africa? What never seems to be mentioned is that this has happened, civil war happens and will happen anywhere in the world. That war is human. And love is human too.

Boy09A-frontLet the back cover copy of Saah Millimono’s Kwani Manuscript Project second place winner, Boy, Interrupted not deceive you, when it talks about the trauma and pity of war. In fact, I advise you to ignore Olufemi Terry’s focus on violence, exploitation and displacement in his blurb for the novel. How could Terry not see the love? This is really a love story (read in Chimamanda Ngozi Adichie’s tone). I want to mistrust Hawa Jande Golakai when she says that Millimono captures Liberia’s people, politics and cityscape during its civil war, even though I am not Liberian, and she is. This is a bigger story about love and its triumph. For me, it is a story about one boy, one girl who trust love enough, and despite the interruption of their lives by war are determined to keep trusting love. Maybe all the Liberian people are romantics like Tarnue and Kou? I don’t know. I only know these two lovebirds from Millimono’s novel. Helon Habila is the only one of the three writers whose endorsements appear on the back cover of the Kenya-based Kwani Trust published book that comes close to seeing what I see. He describes the book as “a searing, heartbreaking love story set in the civil war years in Liberia.”

While both love and war stand out in this 150-page novel, only love is a result of deliberate actions and a show of passion by the two main characters, Tarnue and Kou. War is an interruption. Out of their control. This book screams one thing: that love can triumph against all odds. That war can indeed interrupt love, but love can triumph. War is a loser. Can someone say, Amen? It therefore beats my understanding why the focus by the blurb-writers is on the war, on violence, on exploitation, displacement, everything else but the love. When Ben Okri talks about the tyranny of dark subjects, I think he is unknowingly pointing the fingers at the readers (including himself), even if he directs the missiles at the writers.

But, I promised to tell you a story. Tarnue sleeps in class. He has been sent to live with his uncle by his parents because he is a walkabout. Do you remember Bastard of NoViolet Bulawayo’s We Need New Names? This is the Tarnue of New Georgia Estate. His uncle’s wife does not joke. She overworks and starves the boy. One day, he eats a piece of the bread he sells for his uncle’s wife. And she beats him until he literally becomes a walking wound attracting the teacher’s attention. And Kou. Kou, a daughter of a big man in government. Pause.

Do you remember your childhood days? Did you have a best friend when you were a child? The days of playing mummy and daddy. The days of imagining and creating your fantasy futures? Please, say yes. I did. Childhood romance. They call it friendship, but despite the innocence of childhood, this was a form of romance. This is what happens to Kou and Tarnue. And this love actually saves Tarnue a lot of pain. He is introduced to Kou’s family. They are rich. Really rich. Beautiful things are happening to Tarnue and Kou that may make you jealous, dear reader. Very beautiful romance is happening.

Then Taylor escapes from a United States jail. Ellen Johnson-Sirleaf is mentioned in the narrative around these parts. The president of Liberia at the time, Doe is mentioned several times. Our Tarnue and Kou are suffering. But dear reader, do not be so distracted by the gory war that you miss what is human. The rape of women, the looting, the ugly betrayals. The murders. Kou loses both her parents. In these hard times is when you see the purity of the love between Kou and Tarnue. I won’t lie. When Kou disappears, I get heartbroken. Tarnue ends up a child soldier.

I literally screamed in excitement on reading: “In 1991 I was passing by a booth, selling toothpaste, when suddenly I heard a voice I recognized coming out of the booth dense with opium smoke. There, sitting between two men and big with child, was Kou.” At page 138. Am I not hearing a Hallelujah from y’all? More trials and tribulations follow. Serious things. Tarnue and Kou, by legal definitions are children. But my friend, love is love. Let me cut the story short. You need to find this book and read it.

If you remember the hawker and the rich girl in Chibundu Onuzo’s The Spider King’s Daughter, you are onto something. There is some part of the hawker in Tarnue. You remember Ugwu of Chimamanda Ngozi Adichie’s Half of a Yellow Sun? You will recognize a similarity between Ugwu, my good man and Tarnue. Oh yes, Ishmael Beah’s haunting memoir, A Long Way Gone, will come to mind. And the innocence of childhood educational dreams and ambitions in Camara Laye’s The African Child, will come to mind too. Millimono has written an excellent book about growing up and about love against all odds.

Knowing that some privileged critics nowadays have put all African writers on notice: that stories of suffering set in Africa are not welcome, that only happy stories pass their privilege pornography test, I am anxious to see how many of that tribe will rate this story. I will not be surprised when the triumph of love is missed by card-holding members of the African privilege pornography club of critics in their reviews of the book. I mean, some missed the rib-breaking humour and mischief of Darling, Chipo, Stina, GodKnows, Sbho and Bastard of Bulawayo’s We Need New Names because their eyes could not look beyond the darkness of HIV, misrule, poverty and other ills. Sometimes we fail to see the triumph against all odds because we want to see the odds triumph.

This piece was initially published on Africa in Words.